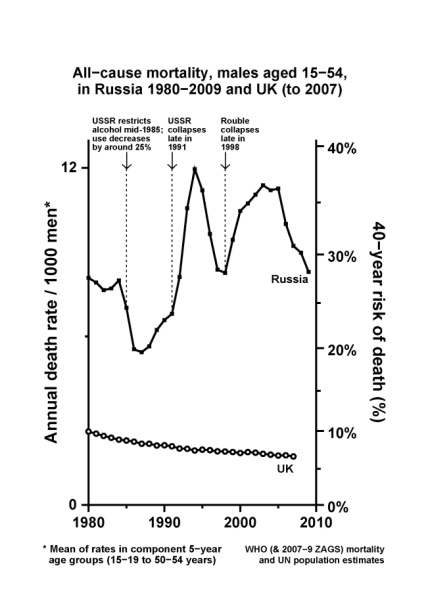 All-cause mortality rates in middle age and early old age in Russia greatly exceed those in the West, and the sharp fluctuations since 1984 are unprecedented for a modern industrialised country. In collaboration with Professor David Zaridze of Moscow, CTSU conducted a retrospective case-control study of adult deaths between 1990 and 2001 in three Siberian cities to assess and the relevance to alcohol consumption to cause-specific mortality.

In this retrospective study:

A prospective study was also established to confirm the findings of the retrospective study and asked all adult members of the decedent’s family (0.2 million) to complete questionnaires about their own smoking and drinking habits, other lifestyle factors and physical measurements (blood pressure, anthropometry, and peak expiratory airflow) and to provide a pinprick blood sample using dried blood spots. Long-term follow-up is ongoing through mortality records and cancer registries. This is the largest prospective study in Russia.

The published report (Zaridze, Lancet 2014) confirmed that the high number of early deaths in Russia is mainly due to people drinking too much alcohol, particularly vodka.

The prospective study on mortality in Russia is a collaboration between CTSU and David Zaridze at the Department of Epidemiology and Prevention, NN Blokhin Russian Research Centre, Moscow, Russia. Specific proposals for future collaboration or specific analyses, addressed to the study's Russia-based or Oxford-based investigators, are welcomed. Any requests for the sharing of data will be considered according to the principles set out in NDPH’s data sharing policy.